When Lost In The Forest, Hug A Tree

Just Make Sure You Get Lost First

This blog is many things. In part storytelling and in part instructional. I've written in the past about how to write and publish Amazon Kindle books using basic strategies on using Amazon's Kindle publishing. It's easy to upload and publish, but there is a whole slew of other things I'd like to write about on this blog.

This is a post about finding your way by getting lost first. 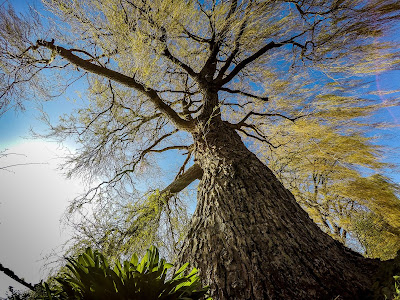 As a teen, I spent a lot of time outdoors and growing up in Southern California affords quick access to many places.  Any point on the map, from the ocean to the mountains and deserts are but a short drive.

In a matter of hours, you can go hike the forest, swim in a pond beneath ice-cold waterfalls, pack up the car, drive to the beach and catch a sunset surf-sesh.

With family, we explored amazing wilderness parks like Yosemite and Yellowstone, as well as all points between.

Often with my friends and their family, I'd spend a good portion of my early teen years hiking the John Muir Trail, the Cascade Mountains, Mount Whitney, among many other places.

There were so many memories and lessons learned along the way.  To a great part, I'm sure it's part of who I've become.

But one particular adventure above all that really formed my belief in teamwork and self-discovery.

At 5:00 am, a group of 20 of us, me, my friends and their dads set off for a weeklong hiking trip through the Sierra's.

The day before we each went over our pack list, divvied up the food, water purification tablets, cooking equipment, tents, anything we could carry and need, with the dads taking the heavier items while we took the tents and our own bags, and together we all packed our gear.

We revisited our itinerary with everyone having a map and outline of where we'd be and when. One of the families staying behind was our emergency contact, with the day-by-day plan of our hike just in case something went wrong.

The Best Path Is Sometimes Unclear

Some chose to ride together by what they planned to read, this was a time before Amazon Kindle books were even created, so it was real, hard bound books. Some of the boys chose their cars by the games they would play; others chose their rides not by what they wanted to do, rather, some chose who they'd ride with by who they wanted to avoid being stuck in a car for a few hours.

As soon as everyone was settled in, our little convoy drove for a couple of hours to our base-camp, all of us watching the claustrophobic city open up to the broad horizons that stretched toward the surging mountains. It was summer, and we had turned our backs on the cluster and confinement of the city for a week of unfettered exploration. I dozed off a few different times along the way, 5 am being awful early.

Once we pulled into the base camp, we parked the cars and stretched our legs a bit.  Some went off to shit in the woods, others merely to take a piss.  The plan was to set camp, stay for the night, then begin our 50-mile circular trek back to this particular spot.


The morning came a little too quick. Anyone who's slept outside on the cold earth knows the stiffness that comes with sleeping on dirt.  Even as a teenager it takes you a while to warm up, to stretch out the night stiffness that settles in.  The air is refreshing and recuperative, but there's something to be said for the beauty of sleeping in bed.


After a short breakfast, we broke camp and set out on the first leg of our itinerary. The terrain was rough, there were periods of where the trail had degraded to mere gravel.  Footing could be slippery, especially on slopes that didn't have switchbacks.

We walked in the buddy system; each of us partnered with another teen, and you walked at whatever pace the slowest could muster.  Typically you chose to match speed with speed, but there was some partners content on drifting back.

The kids led the way, the dads trailing.  We all had a rule that if the last dad caught up, you had to clean the "latrine" at base camp.  So we hiked with momentum and a purpose.

About mid-day, the clouds rolled in, and the sky turned gray.  The change in the air was noticeable. When we had been able to be shirtless, now we were digging for our long-sleeves, and wondering about where we each had packed our rain parkas.

At once, the rain began.  Followed closely by lighting, the kind of lightning you hear during one of those storms that shake the house and scare the dog but never actually see.

It wasn't long before the lightning struck a boulder not too far from where we were walking.  The shrapnel shot out, piercing what skin we had exposed from out of our parkas, pants, and packs. It sounded as if the thunder was a 12 gauge shot that went off next to your head.  It boomed around your brain, shaking the snot out of your sinuses and down your throat.

This wasn't the first time we were camping and hiking through horrible weather. The difference this time was that with the rain and lightning, we had lost the trail. We were wandering off course, and because of the lightning, we were running further off our path than we had planned. We had set out that morning to make our way to Purple Lake, but now we were surely lost. It wasn't long that we found a lake, and to this day I'm not certain it was Purple Lake, but it would suffice for the time being.
That's because avid hikers know that if you lose your way in the forest, you want to stay in one spot so the search team can find you.
And in short order, the dads were able to find our location and meet up with us, where we set camp and stayed through the night.
The point of this discussion is that by writing your thoughts and publishing them, you have ZERO control over how they'll be received.  And publishing on any platform, whether a blog like this or using Amazon Kindle books as a platform for your story, you have ZERO control over how it'll be received.

It's like planning a hike only to take the deer trail instead of the well-trodden footpath.

As the writer, all I can do is to try and make the message as coherent as possible, one that I want to share and one that is hopefully read. Planning is essential, but often we get more out of losing our way, of walking down the deer trail than the road heavily traveled.

It's often what we can't control that get in our way, and what leads to great discovery.

Stumble a little through the underbrush, explore new things and find out that the path you first began has now led you down a whole new road.

It's a journey worth discovering.

If you're interested in reading about ways you can self-publish your own Amazon Kindle Books, or are interested in habit formation, you can check out those articles here and read a productivity and habit post here.