Get Going! Why You Need To Get Started With Self-Improvement Goals Even When You're Not Ready

In middle school, I was just as awkward as everyone else.

I was more awkward than everyone else I knew.

My braces and spacers came with headgear, that thankfully I only had to wear while I slept.

I wrote my own stories - talked about comics with my brother as if they were real (they were and are!), would spend hours staring at walls to watch shadows move.

At family dinners and gatherings, I'd put headphones on and hide behind couches and chairs. Often I wouldn't be listening to anything, the batteries of my walkman (yes, "walkman" - look it up) having died some days before and I didn't have the money or resources to replace them.

This post is about how getting started at working toward a goal can lead to even better, sometimes unintentional benefits.

But looking back on that period of my life, all of those problems seem so simple to me now.

As I was in middle school, confidence was a huge issue.

I struggled every day to feel a sense of fitting in or being normal. It probably didn't help that I moved between two different middle schools in my area.

My parents wanted to try them out for my siblings, and being the oldest, I was the crash-test dummy as it were.  You know the crash-test dummy.  They're the mannequins researchers strap into a seat, from cars to airplanes and use to test the types of impact a body may go through in various degrees and speeds of impact.

Zits were another issue.

As were my forearms.

They stung like someone had performed a painful surgery on them while I slept. 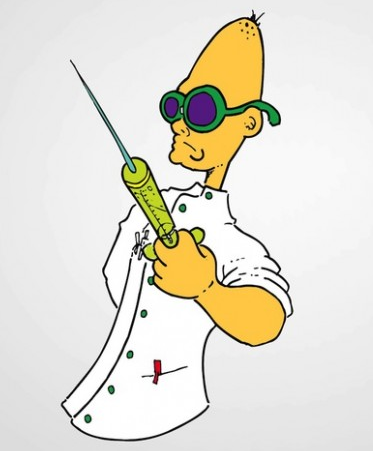 I dreamed it was a little doctor in a white lab coat, with a head mirror and stethoscope wrapped around his neck like a waiting boa constrictor while his nurse straps me down on a gurney.

After a bit, the surgical lighting would be turned on, and he'd perform his magic. Without sound or noise, he'd put extenders into the marrow of my ulnar and radius. Once he was done with my arms, he'd move to my legs.  He inserted the same separators into my shin bones, making them feel like they were bamboo splinters, fiber breaking apart in every direction, and then Poof, he'd be gone.

Until the next visit anyway. My growth spurts hurt like hell.

But I figure everyone had the same experience with growth spurts.  So that was nothing new.


Fat Guy In A Little Coat


So knowing that exercise is an important factor to weight loss, one day I put on my shoes - probably a pair of beat up Converse - this is before the running shoe industry was so omnipotent - and went for a run around the neighborhood.  In my beat up Converse and Levi's and whatever shirt I was wearing already, I went running.

When a small, overweight middle schooler is running around the neighborhood in regular clothes, the neighbors probably thought it was a bizarre sight to behold.

For poor old Mrs. Swearinger, looking out from the nook of her kitchen window, she probably wondered what had gotten into me. She already knew that we had a bizarre home environment, but now that I was running down the block in the same clothes I had gone to school in earlier, it probably seemed that something was wrong.

Perhaps there was a fire and she should call 9-1-1.  Or perhaps my puppy "Tootsie" got loose and I was running after her.

Maybe she even called my house wondering if everything was ok.

I don't know what she did that day.

All I knew is I wanted to start running.

Over time my interest in exercise led me down a path that I never imagined.

In high school I joined various teams.  Even played a few sports in College.

And got into coaching for a long time.  Coaching allowed me to work with some amazing colleagues, and mentor a number of outstanding young people, and travel the world.

All because I went running one day.

Sometimes our actions can lead to some incredible unintended results.

But you have to get off your butt and do something to find out.

Email ThisBlogThis!Share to TwitterShare to FacebookShare to Pinterest
Labels: achieve goals, self improvement