My March Into Spring Challenge

Truthfully I should have released this statement yesterday, but I posted How To Get S#!T Done - My Kindle Publishing Experience instead.

Why did I do it this way?

In this post you're going to learn how making ourselves accountable to others sometimes makes us less likely to accomplish our goals; the importance of showing people how you do your craft; and how to move forward without a plan.

The Truth About False Starts

I wanted to explain the purpose of why I was taking on the challenge of writing so many posts in so many days.

Especially when I'm unsure where I'm going with this challenge.  My editorial calendar is sparse, I've got minimal ideas and even less time.

So the inversion I'm using is writing about how the sausage is made, my process and the thought behind them before telling anyone why - more on that below.

Think of it as a bit of a false start like this poor guy: 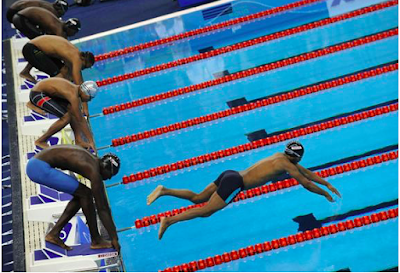 Not only did he get a false start charged against him, by the looks of his dive, he also had a great belly-flop as well.

The point of inverting the publication of these two articles is that; 1) the article I posted was more in line with what I felt was needed to be said and had a little more value than a post about MY ambitions such as this one, and 2) I wasn't 100% sure I was going to announce my intentions.

Why did I hesitate?

The Truth About Goal Setting And Accountability 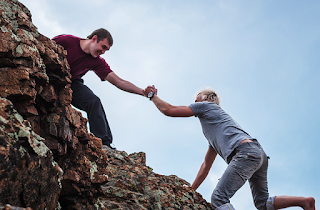 When you think about setting a goal, there are a number of popular beliefs on how to best accomplish them.

One way is to write it down and document your actions every day that you fulfill the steps necessary toward your goal.  It's been called the Jerry Seinfeld method, writing a joke a day, marking a calendar with an "x" that over time creates a visual chain - one that you don't want to break.

Other ways include a "vision board" - placing images, ideas and quotes that are motivational in nature and that you can focus your mental/imagination on.

Some believe in making our goals accountable with others by telling them all about it before hand.

The idea is that by sharing your goals with someone else, a friend or family member that you trust, you're making yourself accountable to not letting that person down.

There are plenty of studies that show that by announcing your goals aloud and to an audience, the odds of you accomplishing them decrease significantly.

How about this post: Shut Up! Announcing Your Plans Makes You Less Motivated To Accomplish Them

It's a review of studies that date back to 1933 that disproves the modern idea that when we announce our plans, we're much more likely to accomplish them.

The truth is the opposite actually.

Another reason is that I wanted to explain what I was doing with evidence that you could see.

As I wrote yesterday, people like to see a finished product.  They also really like to see how the sausage is made.

You've listened to the lyrics thousands of times; memorized every time change and melody possible, and still have no idea what the song is really about.

So you look to interviews, videos, YouTube, Facebook groups, anything to try and understand what's the song about.

Until the band speaks and shatters the illusion.

What you thought was a heartbreaking ballad of lost love and the power to overcome that broken person you were, is revealed to be about a drunken day with a dog and a squirrel chasing each other on the 4th of July.

(This never happened to my knowledge, yet...)

In one singular moment, a songwriter can tell you with absolute certainty that your interpretation is correct, or wrong.

And that experience is exhilarating or crushing in its revelation.

But only if you get to see how the sausage is made that you can truly understand the intention the artist had.


So that brings us to why I hesitated to state my goal of 31 posts in 31 days.

Look, I'm not a prolific guy.

It takes me awhile to percolate an idea, let it marinate and finally set out to explain it.  That's why I showed the screen shot of a post I've been struggling with for over a week.

And once I write that idea, develop the concept and characters (in fiction, a tone in blogging), I'm spent.

Until I pick an idea, see it develop and want to share it.

So the main reason I inverted the publication of my announcement for posting 31 articles for 31 days and yesterday's about "sausage making", was that I wanted to explain how and why I'm doing what I'm doing.

Especially since I'm beginning this challenge of writing 31 posts with only 4 ideas and topics so far.

It may seem (and you'd be right) contradictory that by claiming to write 31 articles in 31 days is the goal, which as we've discussed will minimize the probability of it happening, by showing you my process of how, why and when I go about generating my content, I secure a reasonable chance of success.

Continuing with the arcing themes of this blog so far, we'll be discussing Creativity, Self-Improvement, Goal Setting, and Maximizing Productivity in upcoming posts.

But it's a wide open editorial calendar and I've only got 4 ideas.

And this was one of them.

Man am I tired.