Beware the Ides of March

Failure To Prepare Is Preparing To Fail

This is a short post today about the process of trying to write 31 posts for the month of March.

It's a true challenge, I'm not going to lie.

I have two really long pieces I'm working on right now and those seem to take more time than I have available to finish them.  Especially with trying to keep the publishing schedule that I announced.

Perhaps that's the ides of March I should be wary of. 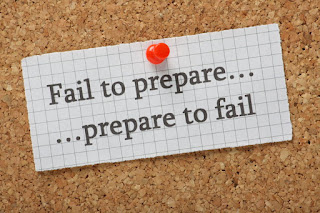 The significance of the ides of March was made famous by William Shakespeare.

In his play, Julius Ceasar, a soothsayer warned Ceasar to "Beware the ides of March," otherwise the day of his assassination at the hands of the Roman Senate.

Over time, the idea has taken many different meanings, to wit:

The assassination of Caesar isn't the only major historical event to happen on March 15.

For example, the ides of March was the day that Roman citizens had to pay outstanding debts.

Christopher Columbus returned to Spain after his first voyage to the New World.

The last Tsar of Russia, Nicholas II, abdicates in 1917.

In 1985, the very first Internet domain name, symbolics.com is registered.

So there are good things that can happen on March 15.

I just wouldn't want to be Ceasar.

Or the Roman citizenry - I haven't finished my taxes yet and a month is a lot of extra time.

I didn't plan the month of March out very well, but as they say - if you fail to prepare, you've prepared to fail.
Posted by David Throop at 7:16 PM